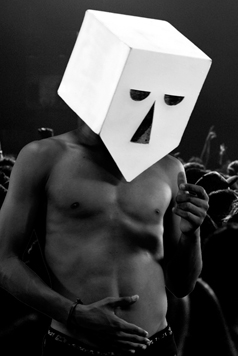 BaianaSystem is one of the major urban music groups produced in Bahia (BRA). Influenced by Jamaican sound systems, the group not only amplifies sound but also the essence of local traditions. A system that manifests itself on stage or on the streets spreading out Brazilian music without borders.

The sound produces a constant dialogue between the Bahian guitar and the singing, led by bass lines which complement its frequency spectrum. On top of that, there is great percussive base force (electronic or organic) as well as Afro-Latin rhythms such as Frevo, Samba-Reggae, Pagode, Groove Arrastado, Ijexá, Kuduro and Reggae.

The group lineup is Roberto Barreto on Bahian Guitar, Russo Passapusso on vocals and SekoBass on bass additionally supported by several musicians, producers and artists. Currently, those who participate most frequently in this sound are as follows; DJs and producers João Meirelles and Mahal Pitta; percussionist JapaSystem and guitarist Junix.

Over and above music there is the visual conception – an inseparable strength in BaianaSystem’s communication and upbringing. From that background the mask leaps out – a symbolic element – as an icon turning into the embodiment of a “being”, a bond with the audience making everybody feel as a vital part of this system. This work is directed by the designer Filipe Cartaxo in workstream with Maquina de Louco, coordinated by artist Filipe Bezerra who plays a part as the creative core of BaianaSystem’s project planning and production.

Since its first studio album release – BaianaSystem (2010) along with the EP Pirata (2013) which delivers the hit “Terapia”, BaianaSystem has already performed worldwide at the New Orleans Jazz Festival; at the Global Fest in NY; at Fujirock (Japan), as well as gigs in Russia, China and France. In 2017 the group performed at the renowned Roskilde Festival in Denmark. In Brazil, it has been to almost every state capital, having played in important festivals like Lollapalooza and Rock in Rio. Besides that, BaianaSystem is clear to have stood out in Salvador and São Paulo carnival.

Due to its track record, the band had the chance to hook up with artists like the Angolan singer Titica in the track “Capim Guine” and the regarded Brazilian band Nação Zumbi for the latest release “Alfazema”. At 2018 Carnival BaianaSystem performed in Salvador and Sao Paulo on a band float called Pirate Ship. This time, in addition to the public the group has attracted other artists attention.