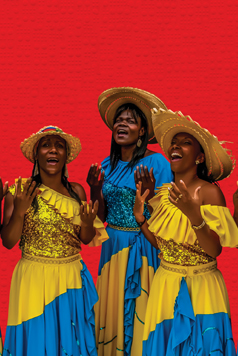 Canalon’s music is all about ancestral sounds from the Afro-Colombian Pacific Coast which recreates all the power and rhythm of the chonta marimba, with it's guasa and bombo. Their melodies and lyrics talk about the jungle, the river, the miners and all things that happen in the town they come from. Hailing from the town of Timbiquí in Cauca state on the Pacific Coast, the female singers are led by Nidia Góngora and are supported by a band using a range of traditional percussive instruments such as the tambora drum and the xylophone-style marimba.

Their interest in traditional music has lead Nidia Góngora to work with Quantic for the past five years in collaborations and tours across Europe. In 2012, Sofrito Records included in its compilation record LA ZORRA Y EL PEROL, one of Canalón’s classic songs. In the same year, the group made a cover of La Jeanne from renowed and beloved French artist George Brassens

Their last Album ARRULLANDO is out and it gathers the most traditional ryhthms from the pacific coast. It has been nominated for BEST FOLCLOR RECORD at Shock Awards in Colombia; the most important awards of music in Colombia.