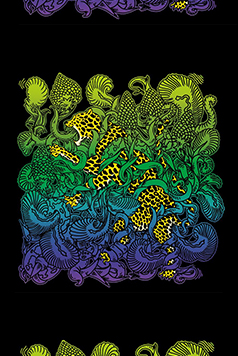 El Leopardo is an exciting new collaboration driven by legendary Colombian producer/DJ Daniel Broderick a.k.a Dani Boom. With their debut EP released on 12” on Glitterbeat, support from Gilles Peterson on BBC Radio 6 and a slot at Transmusicales festival (as part of their Dec tour in France and Denmark) things are hotting up quickly.

It is not an understatement to say that Dani Boom is one of the most important figures in the history of electronic music in Colombia. After some time studying classical guitar and flamenco in Europe in the 90’s, Dani brought a range of vinyl from acid house to hardcore back to Colombia and began throwing parties. What started as a small alternative scene quickly grew into a movement. Before long Dani and his crew were throwing raves and dj-ing to crowds of 5000 people in abandoned buildings and fincas.

However, Dani Boom is more widely known for his revolutionary production work meshing traditional Colombian sounds with techno, hip-hop and break-beat for Systema Solar (one of Colombia’s most explosive live acts he co-founded). The collective has garnered support from the likes of Gilles Peterson, LEFTO, Debbie Harry, Billboard, Rolling Stone and have also blown away audiences at festivals like SxSW, Fusion, Glastonbury, Roskilde (and countless others) with their infectious energy and electro-tropical blend.

A residency at Bogotá’s premier club for alternative music saw Dani Boom inviting artists like Quantic, Nickodemus, Chongo and others to collaborate live. Inspired by the live experimentations, Dani returned to the studio and found his new sound... El Leopardo (The Leopard) was born.

El Leopardo mesh urban dub textures with big rolling bass and Colombian percussion. It is a deep and profound techno with the essence of Colombian rituals and mantras from the jungle. Thump described El Leopardo as “This is the birth of true Colombian techno” and Gilles Peterson has shown support playing it on his BBC Radio6 show. Such is Dani Boom’s reputation that El Leopardo made their live debut at Sónar festival Bogotá on the RBMA stage and as part of the Exploring City Sounds project by RBMA, El Leopardo was in the studio collaborating with Dengue Dengue Dengue. Soon after they were invited Colombia’s biggest electro-tropical act, Bomba Estéreo, to perform at their Caribbean beach festival (Estéreo Beach) to 4000 people. A few sold out head line shows in Bogotá later and El Leopardo have cemented their reputation as one of the most exciting new acts to emerge from Colombia. The Culture Trip recently included them on their ‘Most Exciting New Bands in Bogotá’ list.

With just the debut EP released so far and more music on the way, European festival dates are already confirmed for 2018 and anticipation is building for this feline to be let off the leash.