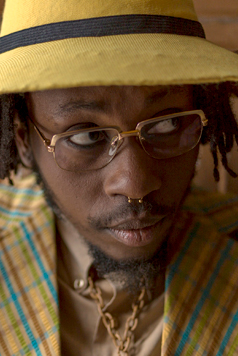 Born and raised in São Paulo, Rincon Sapiência began his career in 2000 and became a protagonist on the Brazilian Hip Hop scene nine years later, with the song "Elegância". In 2014, he released his first EP, "SP Ghetto BR", with influences from electro music, rock, ska, reggae, samba and the classic boombap style of the 1990’s.

In December 2016, he surprised the scene with "Ponta de Lança (Verso Livre)", which reached more than 10 million views on YouTube. The universality of the music and the themes addressed by Rincon’s music allow his transit in other circles that are not necessarily hip hop. And his strong artistic identity is also present in his videography.

In May 2017, Rincon Sapiência released his first album, “Galanga Livre”, elected one of the best of the year in Brazil. After that, he went on tour in Europe and was elected “Artist of the Year” by the Association of Art Critics from São Paulo (APCA).

The show reflects the afrofuturist concept present in his debut work. Rincon goes on stage with his band and DJ Mista Luba, a combination that offer the public a unique and engaging sound.