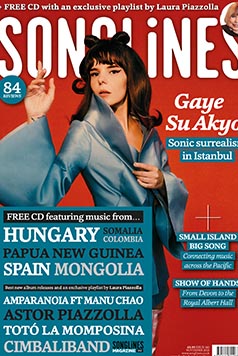 
GSA on Songlines Cover Nov edition. Furthermore to showcase on Sa 27th of October 2018 at Womex in Las Palmas on Twin Stage B 21:45h. Pitchfork writes about the new album “The Turkish singer Gaye Su Akyol has emerged at the fore of her country’s revitalized music scene... mixes Turkish modes and scales with surf rock, and psychedelia.”

Gaye Su Akyol has established herself as one of Turkey’s most compelling young voices and most exhilarating sonic explorers. Her work as a singer-songwriter, producer and audio/visual conceptualist, simultaneously navigates the storied past, the hyper-connected present and the unscripted future. Her new album "İstikrarlı Hayal Hakikattir" (Constant Fantasy is Reality) is her second for Glitterbeat and her most visceral, widescreen and galvanizing album to date.
Release date is 26th of October on Glitterbeat Records.