Alogte Oho & his Sounds Of Joy 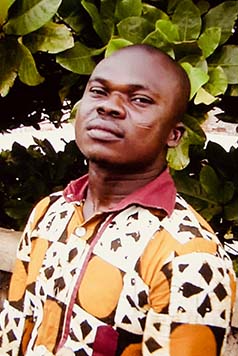 At first, Alogte Oho’s career was moving along in relatively small steps. Neither his first locally released cassette, put out in 2007 when he had just turned twentyone, or his 2010 follow up album, had yielded the successes he yearned for. As a consequence he became desperate to make a living through music and was close to giving up when his life took a dramatic turn.
One day, Oho was riding his motorbike through the chaotic traffic of Ghana’s capital Accra and daydreaming about the possibilities better future. While distracted, he was suddenly hit by a car and suffered serious injuries, almost losing his life. The accident left him confined to hospital for about two months. After the shock was gone, he was lieing in his hospital bed when he became aware of a divine protection that had kept him alive. His first clear thought was ‘Mam Yinne Wa’ (God, You Love Me So). He suddenly started to hum a melody and the song ‘Mam Yinne Wa’ was born.
The first thing he did once he had fully recovered with a new motivation to continue with music, was to run to the studio to record his new song. It instantly became a big hit among his people, the Frafra, and suddenly Alogte was the top Frafra-Gospel artist.
‘Mam Yinne Wa’ is also the title of Alogte’s first debut internationally released album on Philophon. As always, Alogte is accompanied his cheerful choir, The Sounds of Joy.
The album opens up with a newly recorded version of ‘Mam Yinne Wa’, which saw a 7“ release on Philophon back in 2016 and helped Alogte become an internationally recognised artist.
Over the course of nine tracks, Oho takes the listener on a journey to the very unique world of Frafra-Gospel. The songs demonstrates just how he came to be such a universally loved artist in his hometown of Bolgatanga in northern Ghana. Lilting from low slung reggae based numbers like ‘Alema Timba’ and ‘La Ta’aba’ to more upbeat songs like ‘Sandana Fom’ and the album’s title track, which are played in traditional local rhythms. Throughout the album Oho and his Sounds of Joy deliver the Lord’s gospel in soothing Frafra tones.