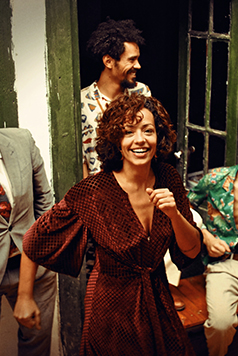 Ayom's self titled debut album is a swinging collection of tracks pointing at, and borrowing from, the folk music of Brazil, Angola and Cape Verde. Blending century old traditions with the black and rhythmical language of lusophone cultures, Ayom defy the purists and provide a hot-stepping and spiritual voyage across the Atlantic.

An Intoxicating dose of entrancing ritual magic come courtesy of this crew who playfully navigate myriad Afrolusophone tropes on this, their delightful debut. Songlines

Among the hottest releases of Brazilian music. Rollingstone

It’s a surprise a minute on this album. If this band sounds this good live, they’re going to positively slay in the post-pandemic touring circuit…Their trade winds sound is either the melding of influences or the uncovering of shared ancestors, but there’s more than enough visceral charm here to set aside “name the influence” and just enjoy a big, buoyant melody skipping between languages and over the rhythm. Afropop

A mix of Brazilian, tropical, afrolatin and afrolusitan sounds and rhythms, between Cape Verde and Angola, Cesaria Evora and tropicalistas Internazionale

It's never the wrong time for a genre bending slice of Brazilian - Angolan - Cape Verdean swing with accordeon…You ‘ll fell the sun on your face. Mojo

Ayom music is charming. It’s both compelling and easy to assimilate. Sounds & colours

"The band Ayom sounds like they’ve been cultivating their Brazil-Cape Verde-Mediterranean mix for years. The variety of rhythms used is overwhelming. Not easy to get right! But they make it work remarkably well, contagiously cheerful, light-footed, and airy. A compact rhythm group, a multifaceted accordion, a radiant lead voice, a balanced production: the feel-good album of the season is ready."
German Record Critics Association