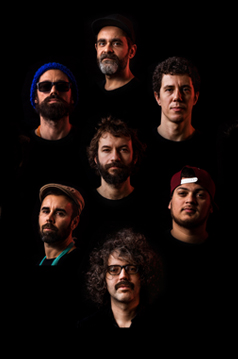 Almost four centuries after the first slave ships loaded their cargoes and set sail, the connection between Brazil and West Africa remains firm and deep. It was African slaves who created the culture of Brazil in all its sorrows and its joys, and those memories have flowed down through the generations. Africa is everywhere in Brazil, and it pulses through the music on Quebra Cabeça (Puzzle), Bixiga 70’s second studio album for Glitterbeat, where two continents dance together across the black Atlantic.

Throughout though, the heartbeat of everything remains utterly African, refracted through the prism of the band’s home in the Bixiga neighbourhood of São Paulo. “What we put on top of that is essentially urban São Paulo music. This city has been a huge influence on us. It has that sense of urgency, always running to catch up. It’s expensive, and services are awful, with so much pollution and violence. But it’s our home and it was developed through immigration. Bixiga is where people come first of all. It’s always had that influx; it’s the story of São Paulo in miniature.”

“We want people to relate to our melodies, to take the line a vocalist might use and play it on the horns. Sometimes in instrumental music, the players are so good it ends up putting the listener at a distance. We make music as a celebration, a way to connect and bring some joy. We want to draw them in. We try to write something very memorable.”

And Quebra Cabeça is a very memorable set of hummable earworms, from the title cut that opens up the album and continuing, sinewy and cool and relentless, all the way to the final note of “Portal.”