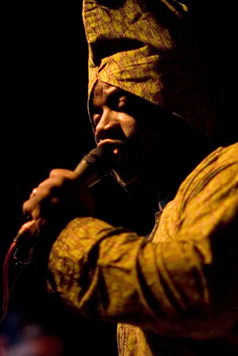 Dele Sosimi stands out as one of the most active musicians currently on the Afrobeat scene worldwide. Dele‘s career began when he joined Fela‘s Anikulapo-Kuti‘s Egypt 80 (1979–1986) and then subsequently with Fela‘s son Femi Anikulapo-Kuti‘s Positive Force (1986-1994). In both bands he was musical director and keyboard player. Since Fela created Afrobeat, Dele‘s Afrobeat pedigreee is therefore impeccable. The music is a blend of complex but highly danceable funk grooves, Nigerian traditional music (including hi-life), African percussion, underpinning the jazz horns and solos from other instruments, as well as rhythmical singing.

Dele toured extensively around the world with Fela and Femi, re-orchestrating and arranging music and also handling the recruiting and training of new musicians. His keyboard work can be heard on Fela‘s Power Show, Original Sufferhead, MOP 1 (Movement of the People), Authority Stealing, Army Arrangeement, ITT (International Thief Thief), and Teacher Don‘t Teach Me Nonsense, and on Femi‘s albums No Cause for Alarm and Mind Your Own Business.

Dele has also performed often with Dr Tony Allen, the king of Afrobeat drumming. Following his first solo album „Turbulent Times“ (Eko Star 2002), he was invited to select the tracks for the 3-CD compilation entitled „Essential Afrobeat“ (Universal, 2004). He was producer and co-writer of "Calabash Volume 1: Afrobeat Poems" by Ikwunga, the Afrobeat Poet (2004). He is a central member of the Wahala Project, whose single Wahala appears on Puma‘s 2006 Soccer World Cup Compilation CD. He has also featured on British rapper TY‘s album Closer (on the track Sweating for your Salary), with "Turbulent Times" featured on "The Afrobeat Sudan Aid Project" (2006).

He has performed all over the world (for example, the Montreux Jazz Festival, Joe Zawinul‘s Birdland (Vienna – Dele was invited to perform as a guest alongside the late great Joe Zawinul at his Charity Event for survivors of Hurricane Katrina), the Ollin Kan Festival (Mexico City), Afrikadey! Canada Afrobeat Summit in Calgary (August 2007), Sensommer Int Musikkfestival 2007 Oslo, Norway (August 2007) Festival Musicas Do Mar Portugal to name a few.

Currently based in London, Dele is an educator and instructor in Afrobeat (via his Dele Sosimi Afrobeat Foundation, and as a Visiting Lecturer in Music and Media, London Metropolitan University). Dele performs in one of three formats, each as compelling and funky as the others – a 15-piece Afrobeat Orchestra (featuring a 5-piece horn section and dancers), a 6–9 piece band (the most frequently used format) or a trio/quartet (with bass and drums/percussion).
Sosimi is abetted by a group of musicians, most of whom have either played with him on previous records or have gigged with him on the live circuit. They all have chops to spare and
the communication between them is near telepathic.