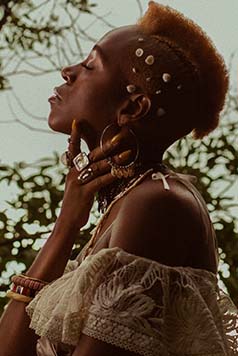 The female MC Karol Conká released her first debut album "Batu Freak" in 2013 and there after made her way to the top of Brazilian Hip Hop. She presents a genuine colorful mix between Electro, Hip-Hop, Pumping Beats, Soul, Ragga and Baile Funk and collaborated with illuster names from Tropkillaz, Buraka Som Sistema to Kondzilla making bootys shake all over the globe. In November 2018 she released her new album "Ambulante" on Sony Records and now touring with her new show in United States and Europe.

Karoline dos Santos de Oliveira was born in 1986, in Curitiba, in a neighborhood called Boqueirão. Since childhood she wanted to be an artist. At the age of 16, she loved music and found herself in rap, both in language as well as freedom. In 2002 she joined Agamenom, a group from Curitiba. She spent several years "studying" her career and in 2010 Karol put some
songs on the internet, she was so successful that soon was called to take part in the MTV program, Na Brasa. She then produced "Boa Noite" video clip and performed live at VMB
2011. This was the first great visibility of the singer, who became a big hit in Brazil.
From then on, she performed around the country, spreading her music, She also recorded her first album "Batuk Freak", released in 2013.

In early 2018 Karol Conka paid tribute to the rapper Sabotage recording a version for "Cabeça de Nêgo" produced by Rica Amabis and Tejo Damasceno, from the institute label, in partnership with Boss in Drama. At the end of 2018 Karol signed a contract with Sony label and released her latest album "Ambulante".