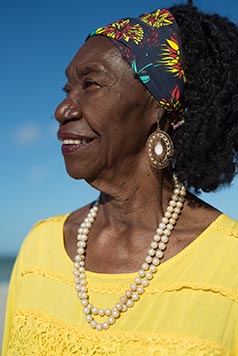 Lia de Itamaracá, was born and has always lived on the Island of Itamaracá. The singer, songwriter and dancer is an icon of Northeastern culture, a key figure of the ciranda (typical dance of Brazil) in Brazil and a living heritage of the State of Pernambuco.
She influenced the music of Chico Science & Nação Zumbi and of the manguebeat generation, she was honored by Paulinho da Viola with the verses “I’m Lia from the seashore, “morena” burnt from salt and sun, from Itamaracá Island”, in the composition Eu sou Lia.

Lia de Itamaracá recorded her first album, Rainha da Ciranda, in 1977. The album introduced the artist into the history of Brazilian popular culture with verses like “Essa ciranda quem me deu foi Lia, que mora na Ilha de Itamaracá” (This ciranda that Lia gave me, who lives on the island of Itamaracá”). For five decades, the artist took her art with perseverance and resistance beyond the folk, regional or popular culture circuits.

In 2000, his album Eu Sou Lia was released by Ciranda Records and reissued by Rob Digital, whose repertoire included “coco de raíz” and “loas de maracatu”, in addition to cirandas (traditional dance) accompanied by percussions and saxophone. The album has been distributed in France by a world music label and Lia's raspy voice caught the attention of the international press, which began to classify her songs as “trance music”, in an attempt to explain the “trance” that the sound caused in the public.

Even though he was a late success, she toured internationally and received a lot of praise. The New York Times called her the “black music diva”.


Being a reference for the new generation, she participated in the award-winning album Galanga Livre (2017), by Rincon Sapiência. And in 2019 Lia was the great honoree of the biggest Carnival Blocks in Brazil, “Galo da Madrugada and Homem da Meia Noite” (morning rooster and the midnight man).


Six decades later, Lia accumulated other titles: "Rainha da Ciranda", "greatest ciranda dancer in Brazil", "diva of black music" and, since 2005, "Living Cultural Heritage" of the State of Pernambuco. In addition to her performance as a singer and songwriter, Lia is also an actress. Her recent work in cinema was with the award winning film “Bacurau”. In 2019, the partnership between Lia and the music producer Dj Dolores yields her new album that reveals that outside the ciranda, Lia is even sweeter and more powerful, a necessary experience for a singer and songwriter who shows her other facets and dares at the height of her career as a singer and actress.