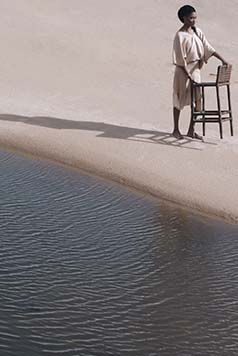 The Bahianese (Bahia) singer-songwriter and poet has released her first album - Um corpo no Mundo (A Body in the World) - in October 2017, and consolidated with it her leading position in this new generation of Brazilian music, which brings a lot of freshness and new ways of interpreting the Brazilian popular music.
The young Luedji Luna sings, as she says herself, her own truths and the truth of millions of afro-descendants and women from Brazil. Intense and intimist in her lyrics, the artist delivers a work based on her personal experiences, from power to overcoming. Luedji Luna manages to travel through thorny themes with a lightness in the voice and a mixture of rhythms whether dancing, or contemplative. She tackles various themes such as affection, abandonment, black genocide, ancestrality, empowerment, healing.
The album is really beautiful, impeccable and pleasant to listen to, a lullaby for the soul, a song that heals and strengthens spirituality.  A plural and stimulating album, imbued with the influences of the "samba de roda", afoxé and touches of cuban jazz under the influence of MPB jazz and music of the "terreiro" (candomblé place of worship); With  arrangements of a refined simplicity that cross our souls and plunge us into a universe where we are received by the powerful and delicate voice of Luedji Luna.  The band is  an multi-ethnic band (Cuban bassist, Kenyan guitarist, Swedish percussionist, Congolese violonist).

On the stage, Luedji Luna, transmits serenity, singing and dancing in a sort of trance. Everything happens in an organic and natural way, creating an atmosphere of emotional acceptance, spirituality and strength .