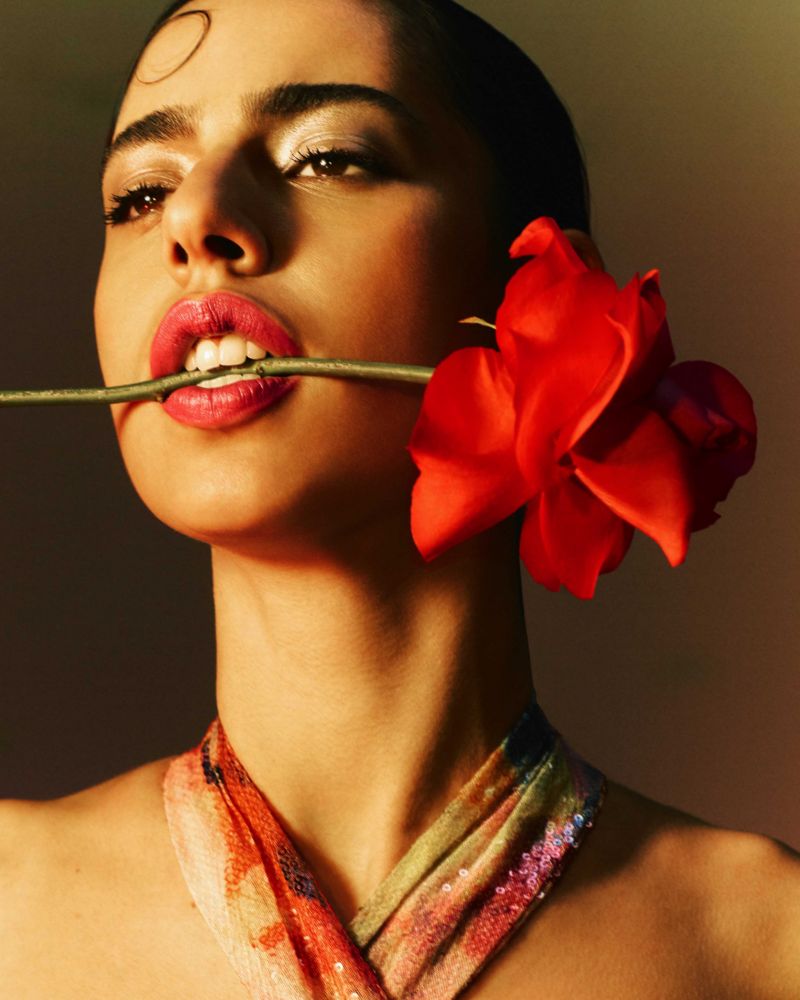 There is something quintessentially Brazilian about Marina Sena that is hard to translate. It’s
in her music, the way she sings, talks, and moves on the stage. Marina Sena is a talented young artist from Minas Gerais with no shortage of personal charisma, with a blessed and magnetic stage presence.

Starting out as the singer of two indie bands in 2015 and putting out a couple of sporadic solo singles, Sena finally released her first solo album independently in August 2021, De Primeira. Marina Sena is a trend and she's here to stay. In the meteoric success of her first solo album, she won three categories of the Multishow Award (Revelation of the Year, Experience and Cover of the Year) and was nominated for two categories of the WME Awards (Revelation and Alternative Music). "Me Toca," the project's first single, was released by the rapper Djonga's Quadrilha label, and its music video quickly reached over a million views on YouTube. With the hit "Por Supuesto," the singer reached first place on Spotify's Top 50 Viral Global playlist and was listed in the top five most played songs on Spotify Brazil. Born in the city of Taiobeiras, in the north of Minas Gerais, there is no one who has not listened to the sound of the singer in recent times. Marina Sena is the name, the face, and the voice of the moment.

"De Primeira" presents to the public her alternative pop music with personality and a unique sonority. The mix of rhythms goes through several influences: elements of indie, funk, samba, "brega", reggae, among others, appear throughout the recording. The arrangements counton instruments as diverse as "cavaquinhos" and synthesizers, always packed by the beats that drive the songs. All tracks are co-written by Iuri Rio Branco, the album's producer. Marina's high and powerful voice packs contagious refrains, which make anyone sing along to songs about passions, desires, and self-knowledge.

As a composer, Marina Sena deals with these issues with her intense, ironic, and sensual lyrics, full of rhymes and alliterations, always having herself as the center of the songs.
The album brings together the best of today's music, representing the syncretic tendency of Brazilian music in a light and competent way. Sena believes pop allows her to transit between all styles, and that pop music made in Brazil has to carry the DNA of Brazilian regional genres. Sena’s music truly carries that identity. Music-wise, it is not limited to one single genre or side of Brazilian culture. But you can’t get the full Marina Sena experience until you watch her live performances and music videos. She moves freely, oozing sensuality, confidence, and humor. The way she sings, deliberately nasal and trembling, feels almost psychedelic. She lets her voice be dragged by the melody, experimenting with the possibilities of her timbre and range as she goes from highs to lows. While her singing style is unique, her timbre has been compared with famous MPB singers such as Gal Costa and Marisa Monte.

An honour for her such comparisons with singers she admires so much, but she also says "Find your own voice, respect your own path, and no matter what, never ever give up." For many she proved to be an intriguing discovery. Maybe she’ll be one of the artists to make the world understand Brazilian pop a bit more.

More Info :
The artist from Minas Gerais did not start in music just now. At 25, she has seven years of career. She took part in the groups A Outra Banda da Lua and Rosa Neon, also from Minas Gerais, with whom she recorded hits like "Ombrin", moved the Belo Horizonte scene, and performed shows all over Brazil. It was in 2020 that the singer and composer opted to pursue a solo career exclusively.

Since then, she has found herself increasingly in the spotlight, requested for festivals such as Coquetel Molotov, Coala Festival, Queremos, and for shows all over Brazil. Now Marina Sena announces her first international tour in Europe from April 7th until April 15th, with a special presence in Portugal in the cities of Lisbon, Coimbra, and Porto, as well as in London, Berlin, Dublin, Madrid, and Copenhagen.