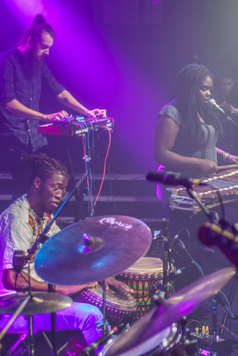 Minyanta,(formerly known as Susso) aka bassist and producer Huw Bennett, creates music inspired by, and directly sampling the magnificent sounds of the Mandinka people, recorded in Gambia, 2013. Initially traveling with the aim to gain perspective as a musician and to discover a new world of music first hand, Huw found himself humbled by such a welcoming community of artists, mostly belonging to the celebrated Suso and Kuyateh griot, musician and storytellers families.

Huws guide and teacher of traditional Mandinka repertoire was Yusupha Suso, who features heavily on the album, son of internationally renowned griot Mawdo Suso and master balafon in his own right. In return Huw was found a bass guitar and asked to perform with the families band, fronted by Yusuphas Mother and his sisters.

As a result of Mandinka marriage traditions, these strong musical surnames that tie the Susso and Kuyateh families to the Kora (21 string harp) and Balafon (Xylophone), means that these talented relatives are found in most villages up and down the River Gambia. So thats where Huw went, recording master griots and their particular localised sounds, learning and recording a new version of a 1000 year old Mandinka standard by the aunty of the cousin met in the last village about 30km back. The album Keira (meaning peace) guides thelistener through Huws journey across the Gambia, into remote dusty villages, petrol fumed cities and lively family compounds filled by 3 generations, a place where your people are the most important thing in life.

The tracks are composed entirely from original source material and Huws talents as a producer and multi-instrumentalist; performing tuned percussion brought back from the region including the 21 keyed Mandinka balafon, Kutiringding drum, as well as drawing on his skill as a professional upright/ electric bassist. The music produced is of course influenced by the tropical beat scene happening in current home of South East London, but through Huws studies and experiences, the traditional sounds are treated with the upmost respect and retain a true Gambian aesthetic.

As an in demand bassist, Huw was first introduced to Soundway Records after being asked to session on the latest Flamingods album, this led to an introduction with label boss Miles Cleret. Such Soundway releases as Ghana Soundz and Kenya Special were a catalyst for Huw to get over to the continent for himself. With both the label and Huws musical ethos firmly set in the idea of globalising music, there is no doubt that Susso has found the perfect home for the projects debut LP.