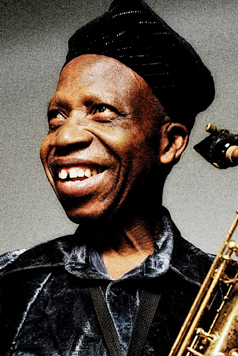 Strut Records announced the first ever internationally released new studio album by one of the all-time legends of Nigerian music, Orlando Julius, backed by the incredibly versatile London outfit The Heliocentrics.

On Jaiyede Afro, Julius takes us back to his roots, revisiting several compositions from his early years which have never previously been recorded. The album was recorded at the Heliocentrics’ fully analogue studio in North London. Like their their memorable collaborations with Mulatu Astatke and Lloyd Miller, the band takes Orlando’s sound into new, progressive directions, retaining the raw grit of his early work and adding psychedelic touches and adventurous new arrangements.

Jaiyede Afro is released September 9th on CD, 2xLP and digital formats. The physical formats feature new photos from the recording sessions by Alexis Maryon and track by track interview with Orlando Julius and The Heliocentrics. The release will be supported by a full European touring schedule.

Press quotes: “Fantastic work” Gilles Peterson
“Classic Afrobeat with a psychedelic twist. Excellent.’ **** The List
“Takes Julius’ Sound into new and exciting directions” Echoes
“Like an imaginary Norman Whitfield production made in Lagos in 1975.” The Wire
“A great big Afro funk party with psychedelic edges.” Froots
“Fans of Fela Kuti will welcome this fine reminder of a past master’s abilities.” Songlines
“A tough and raw Afrobeat album that takes Julius’ sound into new and exciting directions.” Echoes“
“A monstrously great groove!” Mondomix
"Julius is still in rousing form on this new set. I look forward to the live shows.” The Guardian
“One of the great veterans of Nigerian music… gutsy, powerful and varied.” Evening Standard