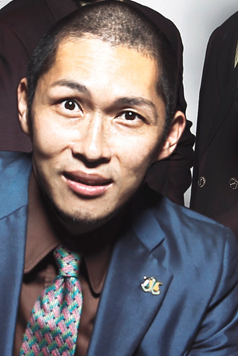 After two decades, the wheels are very much still turning on the Funk orchestra that Japan has to offer. Merged from a university combo to one of the worlds leading group in the genre. The eight musicians on stage in sharp uniforms inspired by 60s fashion; trumpets are spinning up in the air; leader Nakata dancing -Mashed Potato-; from jumping Bebop instrumentals to James Brown funky dancers.

Formed in 1992, all of the members were from the same Jazz society at Osaka University (Osaka, Japan). Nakata recalls "I was 19. We were having fun playing/learning Jazz. Our team was known as the best university/college band in playing Count Basie tunes. I was a trumpet player. But, I dropped out because I could not hit high notes. I finally gave up on trumpet and decided to do what I had been struggling to do ever since I was 16, which was to start a Funk band."

The group was named after the Funk classic, "It is The J.B.s Monaurail" by the J.B.s (misspelling intentional.) It originally held more than 20 people including many horn players, but soon the band shaped itself up into a 13 piece group. After a couple of university gigs, they started to play local bars & nightclubs in Osaka circa 1994-1995.
Signed to RD Records in 1999, OM released its first album “What it is – What it was” (2000) followed by nine albums: three more albums on RD Records (until 2005); four albums on P-Vine Records (2006-2009); one on King Recorrds (2011); and the latest "Riptide" on Shout! Records. In Europe, the last four albums are available on Unique Records (Dusseldorf, Germany).

Between 2006-2009 Osaka Monaurail toured with and recorded for a Soul/Funk legend, Marva Whitney, known as one of the James Browns original Funky Divas. She left two albums with OM “I Am What I Am” and "Live In Japan".

One of the highlights in OM's career was November 2012. They played a special one-night-only special show with the great Fred Wesley, the worlds funkiest trombonist, best known for his works with James Brown, Parliament-Funkadelic and the Count Basie Orchestra.
Currently Osaka Monaurail is producing the new album of Martha High, longtime vocalist in the James Brown Show (1965-2000) and the Maceo Parker band (2000-2016). The album will contain many covers of James Brown's "funky divas" including Marva Whitney and many more. It will be called "Tributes to the Funky Divas" and is announced to be released in summer 2016.

In Japan OM is also known for its works in motion picture field. Not soundtrack, but distribution. Nakata is an independent film distributor and have distributed Superfly (1972), Coffy (1973), "Edification of Weldon Irvine" (1976) and recently "Still Bill" (2011). After all, as Nakata says, "...the Japanese kids long journey of learning how to play Funk never ends".