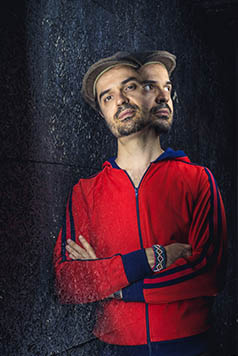 It took french trumpetist Etienne Sevet only two years and his first two albums (Satingarona pt. 1 & 2), to put his moniker, The Bongo Hop, on the global afro caribbean music map. Still a complete unknown back from Cali Colombia, where he’d lived almost 8 years, his works easily convinced such renowned artists as Nidia Gongora (Quantic, Ondatropica) or Patchworks (Voilaaa, Uptown Funk Empire) to collaborate with him, to a surprising result, in music and sound. First hailed by the critics and the public at home, his new album now crosses borders, reaching a worldwide audience, eager to shake their hips and travel in music over the Atlantic.

Ex Dj, reporter, director (with La Voz, he was the first to do a documentary on Nuyorican icon Hector Lavoe), Etienne Sevet popped in from nowhere, like his favorite comic book hero, clandestine african seaman Keubla, escaping from his quarantined cargo ship. After a long exile in Cali Colombia, he arrived in France with his first compositions in his backpack and no particular plan, but luckily met producer Patchworks. Like a dike cracking under the pressure of water, TBH’s compositions flooded the producer’s studio, his colombian and west african influences irradiating in a new fashion. The memories of a lifetime spent in Cali would shine brighter and warmer despite the greyish light of a comeback to the homeland. Between the metro statio, and his small flat, some of the compositions that he’d started to work on while in Cali - as he was hanging out with his neighbour, british producer Quantic (who induced him to start « doing his own songs » and learn music) — came to be developped during lonely walks under the rain. He released his Satingarona pt1 LP in December 2016 and received rave reviews from such prestigious media as Le Monde, France Inter, Radio Nova, Mojo, etc

Then just like Keubla, the forsaken seaman out to conquer the world, The Bongo Hop formed a band, out for a tour of 80 shows, in France, Spain, Belgium and Italy. In between, the longuing to go back to Colombia was met by material problems, so our seaman changed his route : Tanzania, Cape Verde...But each time, as he enjoyed moments of music there, recording sounds or playing music, AfroColombia was always in the memory, like a need to transpose every new adventure to a dream place, while living it to the fullest.The quest for this universal connection between apparently distant landscapes, melodies and rythms, was probably the greatest motivation for The Bongo Hop as a sound collector. It’s clearly visible today in Satingarona Pt 2, an album that-again-defies traditional genre nomenclatura.

A collection of sounds brought back from Colombia, the caribbean and Africa, rich with encounters and moments of shared passion, seductive, the music of The Bongo Hop is clearly afro caribbean, yet it goes beyond the clichés and the day’s trends. May be the ambiguity of the approach, somewhere between light and darkness, the musical melting pot, the research of meaningful lyrics, contribute to this feeling of hearing something original. For the live shows, the band that TBH put together produces colourful atmospheres, with the same philosophy and energy. And always the same direction: to dance, with that colombian-style « caderazo »

For a musician like him, who sees himself more as a craftsman than as an artist, it’s all about dancing and sharing in the end. Designed to inspire images of Latin America and Colombia to its listeners, it draws new, transatlantic horizons to be pursued. Somehow he manages to make every source he’s taking his inspiration from, express the spirit of this multicultural Ocean, through infinite variations. Opaque, like Edouard Glissant said : it’s here but you’ll never quite catch it.

RADIO NOVA PARIS / David Blot: "Thumbs up for this great record!"
KCRW LOS ANGELES / Jeremy Sole : «It's an amazing album ! I want to do the remixes for this"
LE MONDE PARIS / Patrick Labesse " a very tasty album, we can't wait for the next one!"
NPR / David Sommerstein : «This is a total banger on the club dancefloor ! "
WBUR HOUSTON / Jeremy Hobson: «All of a sudden I feel like it's hotter outside !"
VICE COLOMBIA / Sebastian Narvaez : "an infectious exotic descarga filled with afro latin experiments"
MOJO LONDON / David Hutcheon: "worth taking on any winter trip to the sun"